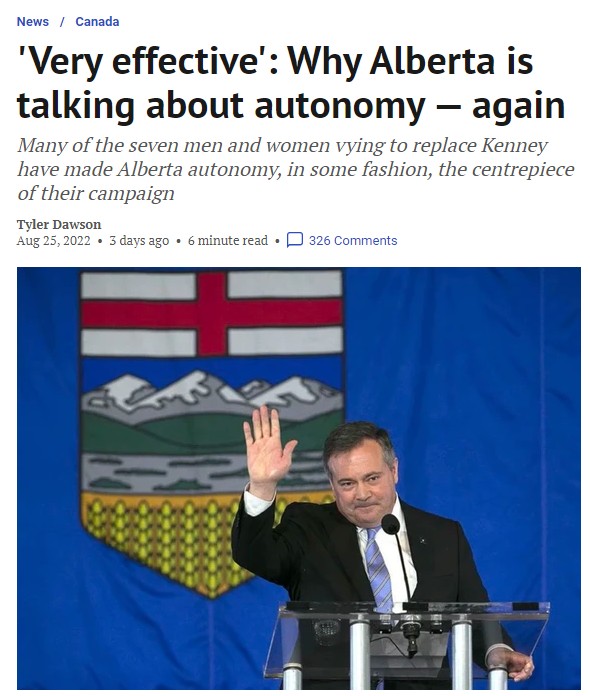 First up, Tyler wanted to know why western alienation was a focal point of the campaign even though Alberta is now experiencing an economic upswing.

Traditionally, alienation has ebbed and flowed as Alberta's economy has gone up and down.

I pointed out that the past seven years of economic troubles have scarred many Albertans, and that a few months of recovery are unlikely to quell the appetite for stronger approaches to the federal government's behaviour.

“It was a big reason why, I think, Jason Kenney was elected in the first place. I think people are just tired of the lack of action or lack of any meaningful progress.”

Unfortunately, the fact is that despite the heated rhetoric, Kenney's Fair Deal approach has been rather apathetic.

In the face of relentless pressure from the federal government to interfere in our ability to build energy projects and grow our economy, the only substantial action Kenney's government took was the Equalization referendum that took place last October - with 62% of Albertans voting in favour of eliminating the program from the constitution entirely.

“[Since then] All we’ve had is a resolution … in the legislature. Nothing’s happened other than that,” said Andrus. “That’s woken up this, this level of frustration with the fact that the system is rigged against us.”

I do also think that Project Confederation can take significant credit for this development too though.

We've worked hard over the last three years to explain to people that the challenges Alberta faces aren't just the result of occasional mistreatment by specific politicians or parties, but rather are a fundamental unfairness in the structure of Confederation and the constitution.

Many people now realize that those challenges exist whether our economy is performing well or not, but obviously we have much more work to do.

Project Confederation's focus will continue to be on promoting the best public policy for Alberta and Albertans, and working towards getting the best deal for Alberta, in whatever legal configuration that ultimately requires.

No matter who is Premier, we will need to keep up the fight - and keep putting pressure on both Edmonton and Ottawa - to get Alberta a fair deal.

If you’re ready to get involved in helping us with this mission, please click here to sign up to volunteer.

Alternatively, if you can help fund our ongoing activism work, please click here to make a donation.

I look forward to seeing you all soon.