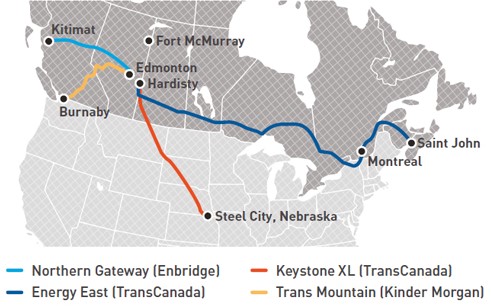 As promised, newly inaugurated President Joe Biden brought the axe down on the Keystone XL pipeline on his first day in office.

Short of a highly unlikely major policy reversal by a popular newly-elected President, or a court process that could take years, the permit’s cancellation effectively puts an end to any hope of completing the pipeline expansion.

Sadly, as the chances of Keystone XL faded, so did the hopes of Alberta energy workers and businesses, who have been crushed by wave after wave of bad news in recent years and were clinging on to Keystone XL as one of the very few remaining lights at the end of the tunnel.

Alberta’s economy has been devastated over the past six years by both external economic conditions and government policies designed to put the energy industry in handcuffs, and many outside Alberta don’t understand the depths of the challenges.

Alberta has survived energy price downturns before, but this time is different, with low prices being compounded by the federal government’s imposition of Bills C-69 and C-48, the rejection of the Energy East and Northern Gateway pipelines, and other regulatory burdens that have seen the cancellation of projects like Teck Frontier, and many more.

With all these government attacks in recent years, there was already significant skepticism in Alberta about the federal government’s commitment to completing Keystone XL.

The meek reaction to Candidate Biden’s promise during the campaign, and President Biden’s follow through this week, seemed to confirm many Albertan’s worst fears that the federal government didn’t really want the pipeline to go ahead anyway.

When it is western Canada’s oil and gas industry in peril, however, Prime Minister Trudeau said almost nothing, while Foreign Minister Marc Garneau simply said that Canada “respected and understood the decision”.

This massive difference in tone makes one wonder whether Trudeau may have even given a wink and a nod to the President that he would be doing the Liberals a favour by taking the credit for something that would have been more politically challenging for Trudeau to do himself.

Whatever happened behind closed doors, Canada urgently needs a clear plan to deal with the situation we now find ourselves in and installing a few extra solar panels won’t cut it.

The appointment of Granholm – ironically, Vancouver-born – has also emboldened those who want to shutter not just pipeline construction, but also currently operating pipelines, such as current Michigan Governor Gretchen Whitmer, who is trying to shut down the existing Line 5 pipeline between Wisconsin and Ontario.

If Trudeau is serious about protecting Canada’s interests, he should announce that in response to the cancellation of Keystone XL, Canada will immediately approve and fast-track the construction of both the Energy East and Northern Gateway pipelines.

It was the federal government’s cancellation of those projects that created the situation we are in now – overly reliant on access to US thanks to a lack of alternatives.

Ensuring access to tidewater, and therefore to other purchases for our products, will provide some much-needed competition between buyers, while putting pressure on the US to consider their own energy security concerns.

If the federal government doesn’t take swift action, it will send a clear message that Ottawa doesn’t actually care about the economic interests of Western Canada, confirming the suspicions already held by many.

Josh Andrus is the Executive Director of Project Confederation (www.projectconfederation.ca), a non-profit fighting for a fairer Canada.