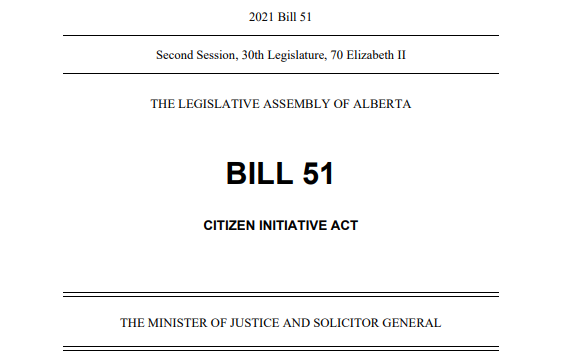 This is a fundamental democratic reform that Project Confederation has been at the forefront of the fight for over the last 18 months.

Project Confederation supporters and volunteers called thousands of Albertans about this issue, encouraging them to reach out to their MLAs and push them to take up this legislation - a huge thank you to you all!

Citizen Initiative Referenda are a legal process that allows voters to sign a formal petition to force a referendum vote on a matter of public importance that the provincial government is otherwise unwilling to undertake.

The Citizen Initiative Act creates three main types of initiatives that are now able to be undertaken: legislative, policy or constitutional referendum proposals.

This isn't quite the same as the recommendations we made during our testimony to the Select Democratic Accountability Committee on Citizen-Initiative Referendums, but they're reasonably close.

We would have preferred a lower threshold to instigate a referendum (given any issue will still require a majority vote to be implemented anyway!), and we suggested a 6-month window for the collection of signatures, as we think 90 days could be problematic, particularly in more rural and remote areas of the province where collection is more difficult.

Still, despite these shortfalls, this is a great win for Albertans and for all of us at Project Confederation, including you our supporters.

The introduction of Citizens Initiated Referenda will have a lasting impact on the political culture of this province and our success really shows the impact our organization, our volunteers, our donors, and our supporters, have been able to have in the last 18 months.

The next 6 months, however, will be even more important.

As you probably know, Albertans will be voting on a number of referenda in October, and while the exact final list of topics hasn't yet been announced, we know it will include equalization and other constitutional fair deal issues at least.

With your help and continued support, we can't help but be excited about what we are capable of as we move forward this year.

If you'd like to get involved in our campaigns this year, you can sign up to volunteer with us here.

We also need financial support to continue with our work.

If you can afford to help us out financially, please click here to make a contribution:

Thank you again to everyone for their help with this campaign and we look forward to working with you on many more issues in the future.